Sydney, Darling Harbor, And the Pope!

Darling Harbour is one of Sydney's most popular recreation spots. Close to 1.3 million people visit the sunny foreshore precinct each year. The area has a colourful history and played a very important role in Sydney's early market days when it was used for receiving fresh produce and timber from Parramatta and the north coast. The past few days I've been branching out and exploring this part of the city. It's a little different from the financial district of Sydney and the "Rocks" area which is where I've spent most of my time so far. I've discovered a few eateries and Pubs outside of the common tourist traps and have found the people to be warm and friendly. This area is also the home of the "Star Casino" and "Maritime Museum." Still another big attraction is the IMAX theater - Currently showing (of all things) "Grand Canyon 3-D." 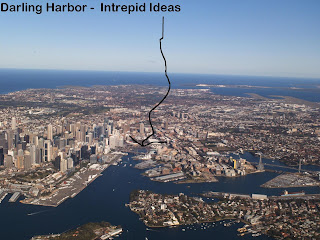 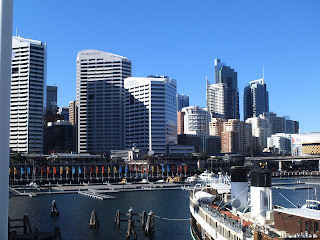 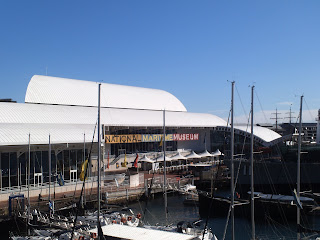 But this week there's an even bigger attraction to Sydney and Darling Harbor: World Youth Day 2008 - WYD08. Organized by the Catholic Church, WYD brings together young people from around the globe to celebrate and learn about their faith on a more regular basis. Over 125,000 international visitors will bombard Sydney- more than the 2000 Olympics. This will be the largest event ever hosted by Australia and will include a visit by His Holiness Pope Benedict XVI. AKA- "The Pope."

As I walk around the city and the Harbor, I can't help but notice the many flags displayed to welcome the attendees and highlight the event. Additionally, I can't help but hear the many different languages spoken by hundreds of small groups of kids. It's truly exciting. 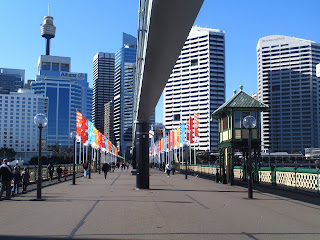 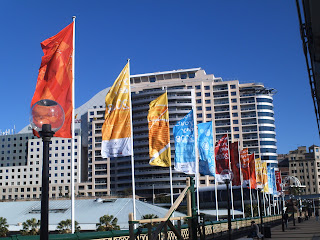 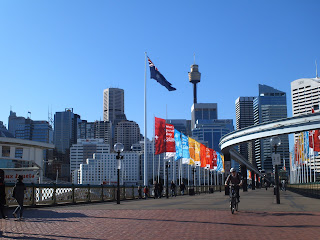 This clearly is a great opportunity for those young kids who are able to attend. I'm sure they will form lifetime memories and make loyal friends. 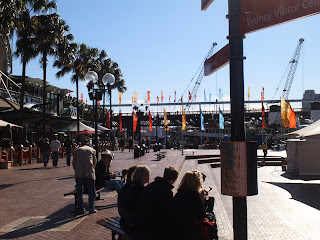 I'm not Catholic but if I happen to see the Pope I'll be sure to ask him to pray for all of us. Cause we need it!

Posted by intrepidideas at 9:15 PM 11 comments:

I just love Summer! There's always something to do. Even if you're not doing anything at all it's fun to just sit around and enjoy the weather doing nothing. My only problem with summer is that it seems to go by so fast and end too quickly. For me the pace picks up with my social schedule and vacation travel so it seems like I wake up one day in May and before I know it, September is here.

That's okay with me, I just try to enjoy the magic of summer as long as possible! With that idea in mind, I'm spinning three of my favorite summer tunes just so I can remember the moment!

What does $450 million dollars buy you in Washington D.C.? How about front row seats to the inauguration parade? And did I mention some prime property on Pennsylvania Avenue? That's what the Newseum folks got when they moved from their location in Rosslyn, VA across the Potomac River to 555 Pennsylvania Ave. NW Washington, D.C. When I say "Newseum folks" - The Newseum's operations are actually funded by the Freedom Forum, a nonpartisan foundation dedicated to "free press, free speech and free spirit for all people." Well, what exactly is "Newseum" you ask?
Don't feel badly if you asked this question, I had to ask the same question when recently I visited Washington D.C. and everyone said I should stop by and check out the "Newseum." What's a "Newseum?" I asked. 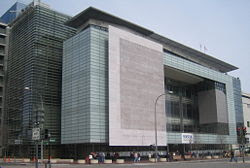 According to Wikipedia:
" The Newseum is an interactive museum of news and journalism in Washington, D.C. It opened at its first location in Rosslyn, Virginia, on April 18, 1997, where it admitted visitors without charge. Its stated mission is "to help the public and the news media understand one another better." In five years, the Newseum attracted more than 2.25 million visitors."
So last week on my visit to D.C., I decided to stroll on by and check it out. I was initially taken by the architecture of the building. Very appropriate for the theme. As I approached, I also took note of the 45 words of the First Amendment to the U.S. Constitution, etched into a stone panel facing Pennsylvania Avenue. When I walked into the building it was quite clear that this was a modern building with up-to-date features. The staff met me as I walked in and offered assistance. Overall, I found them all very helpful and informative throughout the day. The price of admission was a bit steep in my opinion; $20 for adults; But I managed to get them to knock off a couple dollars with a AAA discount - that took some negotiating. With the money I saved, I was able to buy a $3 bottle of water (Ha, ha) I think seniors get in at the rate of $18. No breaks really for anyone. I'm sure they've got to find a way to pay the bills too. Especially the heating and cooling bills. When you see the amount of open space in the middle of the building you'll know what I mean.
I started my tour by taking the escalator down to the Concourse Level where I viewed the Orientation. While waiting for the presentation to start, I took a look around the Berlin Wall Gallery. Supposedly, this section of the wall is the largest span outside of Germany. There is also a three story guard tower for your viewing. The orientation started just as I was completing my tour of the wall. The orientation presentation gives you an overview of the museum and recommends a method for viewing. I followed their suggestions after leaving the theater and took the glass express elevator up to level 6. They suggest that you start at the top and work your way down. Just a note; Don't miss the Sports Theater on the Concourse Level. It's easy to get herded into the elevator prior to seeing this exhibit.
On level 6, I found the "Front Pages Gallery" where you can read the front pages of more than 80 newspapers from around the world. There's also the "Pennsylvania Avenue Terrace." The terrace offers spectacular views of the city, Pennsylvania Avenue, and the Capitol. Looks like a great place to throw a party! 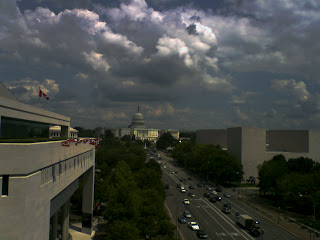 I snapped this with my telephone. I Forgot my camera

So from level 6, I worked my way down. I won't bore you with all the details but here are a few of the highlights:

Be sure to catch the "Big Screen Theater on Level 5 and the 9/11 Gallery on Level 4. The Internet, TV and Radio Gallery on Level 3 is also noteworthy. If you're interested in putting your TV Reporter skills to the test, you can pay $5 and give a live news update on camera. They allow you to chose from a group of prearranged backgrounds including the White House and the Capitol and either read a scripted news story or come up with your own. The story is then available immediately for your review and you can download your copy from the Internet when you get home. Kind of quirky but perhaps a nice memento to remember your trip and visit. On level 2 there is an interactive Ethics Center which allows you to experience some of the tough decisions journalist face in their work. You will enjoy playing the games and working through the scenarios. Last but not least, on Level 1 I found two very interesting attractions. The first is the 4-dimension (4-D) film "I-Witness!", which brings to life the experiences of three inspiring journalists. The second is the Pulitzer Prize Photographs Gallery. This was probably my favorite exhibit. Here I discovered not only the photos but also the emotions inspired by the times and experiences illuminated by the photographers who snapped these shots . Many of the photos were quite familiar. Some were not suitable for children. All were worth seeing! Here are just a few..... 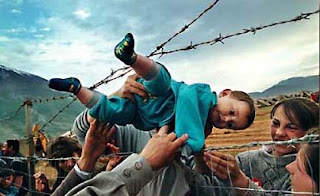 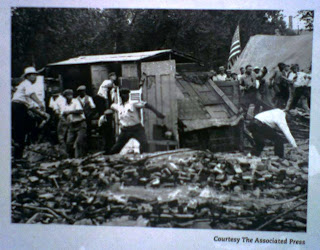 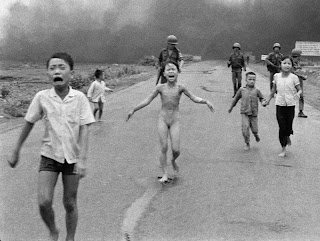 Go to: WWW.Newseum.org to get more photos and information on Newseum.

Overall, I found the "Newseum" well worth the time and money. I would suggest no less than two full hours to adequately view the displays. For me, my visit was a chance to relive much of our history and appreciate the impact of journalism in our world. I was also faced with the realization that much in the world that is "News" really isn't very pleasant. Death and destruction seemed to prevail. Tragic events are often the news that stands out. Such was the case in the "Newseum."

On a departing note, I leave you with this:

The late NBC’s Tim Russert, a Newseum trustee, said, "The Newseum made a pretty good impression in Arlington, but at your new location on Pennsylvania Avenue, you will make an indelible mark."

I think he's right!
Posted by intrepidideas at 3:59 PM 8 comments:

I guess some of you have noticed that I've been off and out of touch for a while. Those of you who have missed me, I thank you for your dedication, frequent visits, and comments. I've been traveling like a mad man lately - Asia, Australia, and across the United States. Abroad for work and domestically for fun. I spent four days in Chicago and then about a week in Washington D.C., Maryland, and Virginia. At the last minute, I jetted home just in time to catch the local fireworks production in my neighborhood.

Here are several clips of the show filmed by an amateur.... Me!

So if you missed seeing fireworks on the Fourth of July, I hope you enjoyed these clips.