I know I'm getting up there in years, but this computer even looks really old to me!

And what are those...  Coasters?

Can you say Floppy Disk?

Okay, I guess really old stuff is all relative. I actually still remember Floppy Disks and probably have a few around the house still, but to these kids, this computer is archaic to say the least.

Some of you "old schoolers" will remember some of the nuances of these dinosaurs.  Like...  "You actually have to give it a command first."  And "You know what DOS is?"  And what about Syntax Error?  That phrase makes my skin crawl.  All that said, my favorite reality of this video.. the comment:

Where would we be today with "NO INTERNET?"

Thank goodness for Al Gore and his internet!  And for anyone who is still confused about whether Al Gore invented (or claimed to invent) the internet or not, here's a pretty good explanation:

Posted by intrepidideas at 1:59 PM 2 comments:

Surf's Up?  Or Cowabunga Dude?

I love this photo.  I took it last month off of the southern coast of Cuba. It puts me in a laid-back peaceful mood. Makes me want to grab a colorful drink with an umbrella in it, put on some music with "Steel Drums" playing, put my feet up, and just chill!

I'm guessing it's the color blue partnered with the endless miles of - nothing! 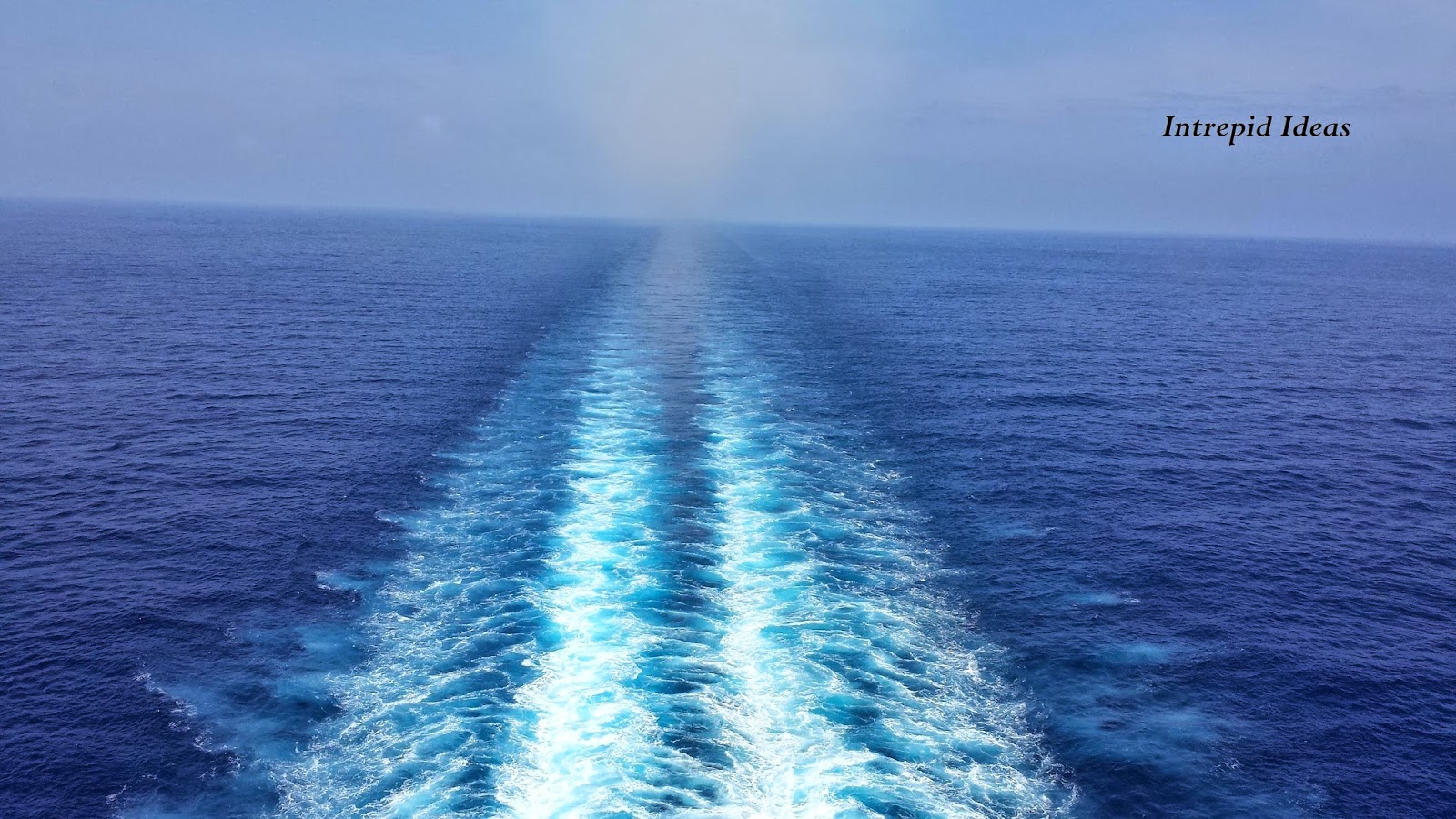 But maybe there's more to it.

How does this photo make you  feel?

Go to:  5 Crazy Ways The Colors Red And Blue Control Your Life.
Posted by intrepidideas at 4:30 AM No comments:

The likelihood that this could have happened 20 years ago and been seen and shared by over 13 Million people ...... Slim

The randomness of it all....  3 strangers, meet  in front of a grocery store.  There's  no drama, no violence, and no trouble.  Just a jam session caught on video by a complete stranger and shared across the internet.

Here's more of the story as seen on Jimmy Kimmel...

So it was just one of those days.  A Friday.  Nothing really special about it.  The Friday before a long weekend....  sure, but other than that, it was an ordinary day.  I woke up, turned on the television and the channel happened to be on a premium station from the night before and there before my eyes.....

Yes.. most of you are familiar with the movie from 2012 I'm sure.  It was on the part where Mark Wahlberg and Mila Kunis are in bed together and Ted runs in to join them and sings the "Thunder Song."  I'll admit  - I watched it for a bit before I switched to CNBC (a bad habit).  I kinda liked how they each had a different recall of the "how they met story."  The goofy dance crash story versus the suave "John Travolta - Saturday Night Fever" rendition.  Oh well, if you've seen the movie, you know the rest.  It gets lewd, vulgar, and funny at times.  A good pizza and beer movie.

Here's the Trailer..  one of the cleaner versions of what's out there.

So anyway, here's where the story gets twisted and weird.  A few hours later as I'm driving around in my car fighting through the pre-holiday weekend traffic rush, somewhere between Beverly Hills and West Hollywood, I look up and there before my very eyes

Fortunately, I had my trusted telephone at hand and I pulled it out and captured these photos. 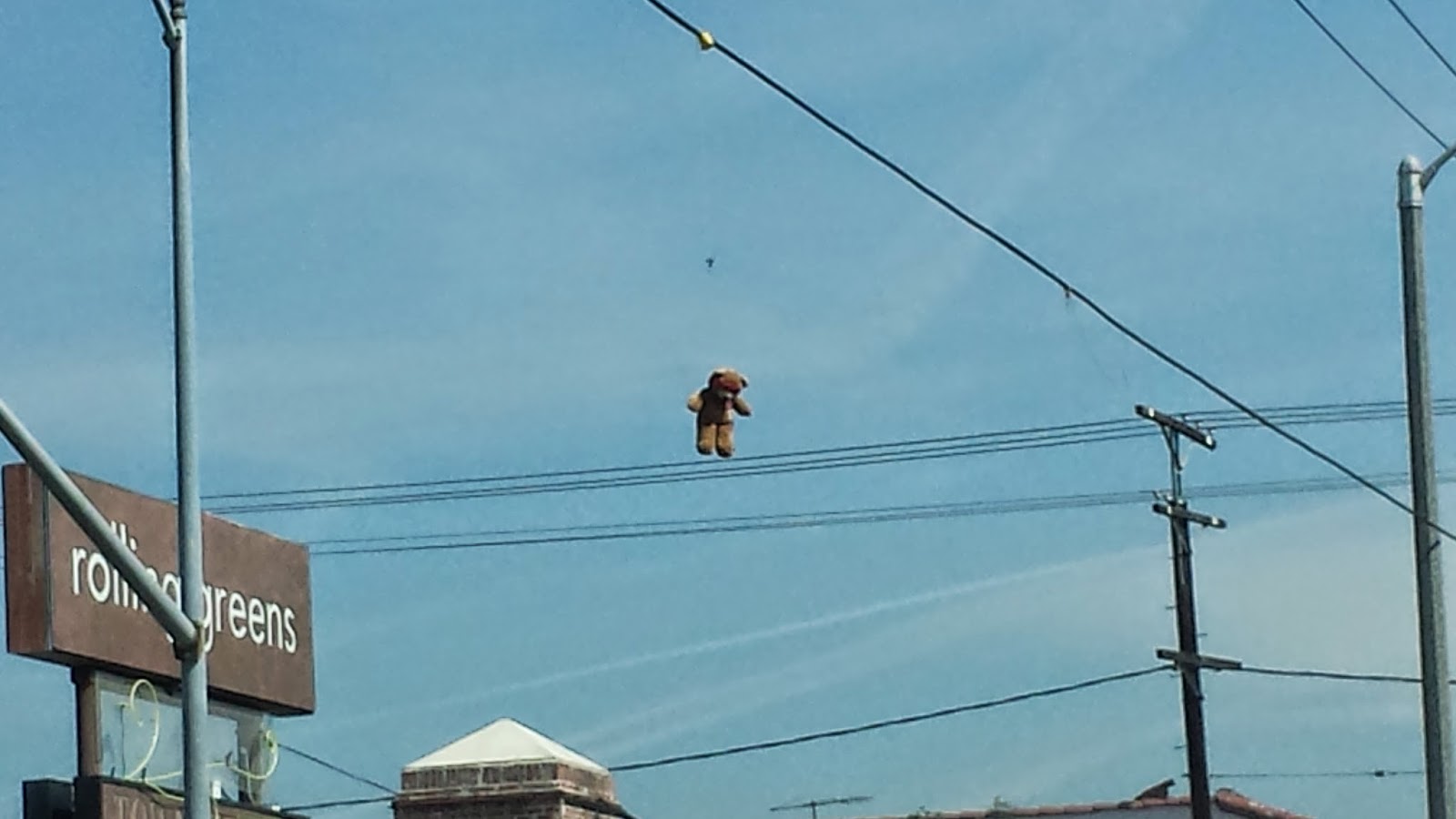 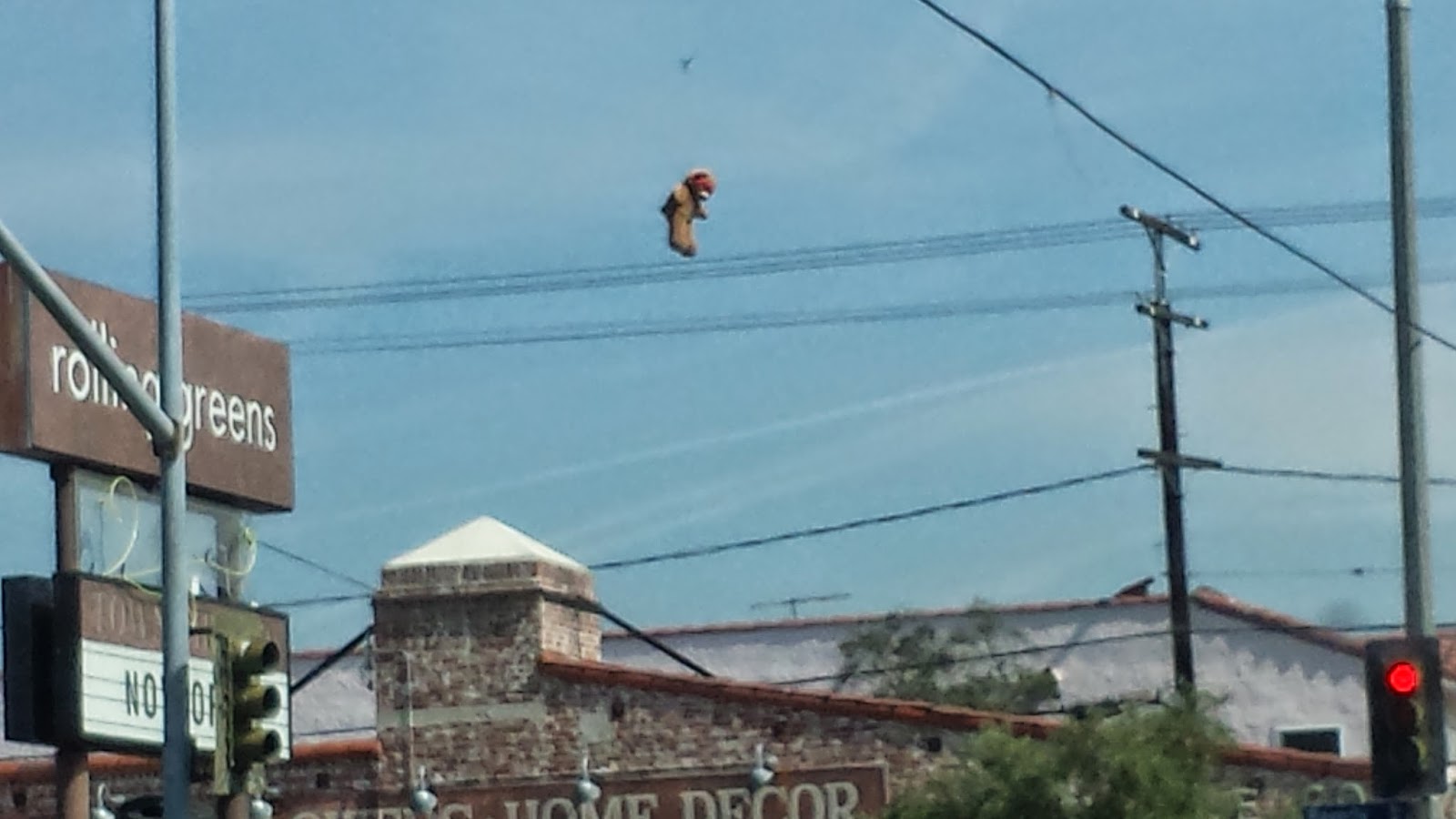 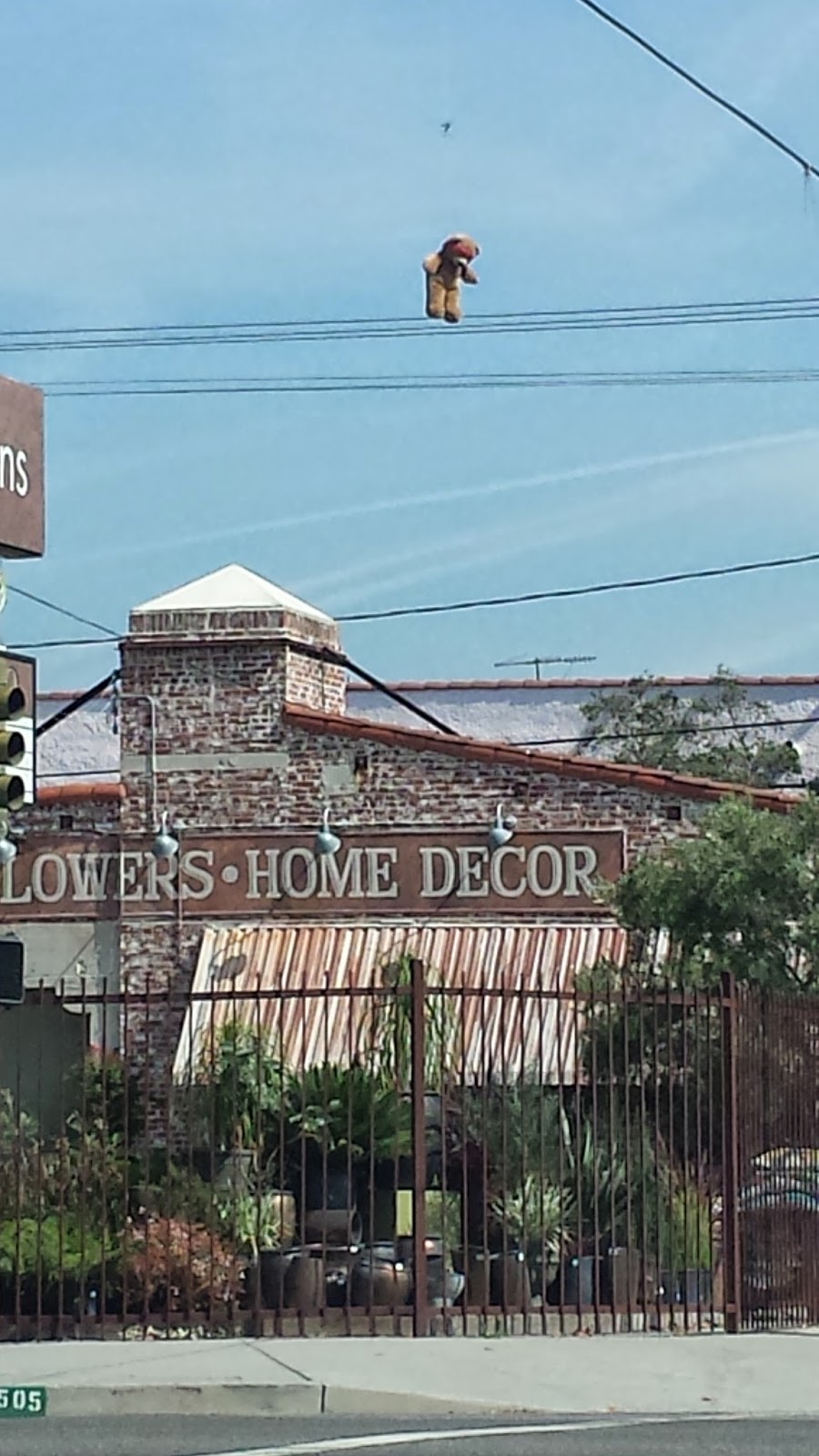 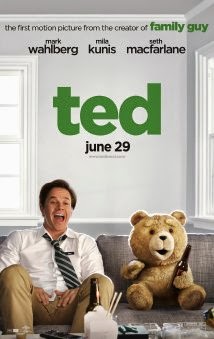 I think Mila did it.

BTW, I learned a few things today as I created this post.  If you're not too bored with this story already, here's what I learned from IMDB:

Seth MacFarlane who directed Ted, wrote the screen play, and did the voice of TED...

was born in the small New England town of Kent, Connecticut where he lived with his father (Ron), mother (Perry) and sister Rachael MacFarlane. He attended and studied animation at the Rhode Island School of Design and, after he graduated, he was hired by Hanna-Barbera Productions (Now called Cartoon Network Studios) working as an animator and writer on the TV series Johnny Bravo (1997) and Cow and Chicken(1995). He also worked for Walt Disney Animation as a writer on the TV series Jungle Cubs (1996). He created The Life of Larry (1995) which was originally supposed to be used as an in-between on MADtv (1995). Unfortunately the deal fell through but, a few months later, executives at FOX called him into their offices and gave him $50,000 to create a pilot for what would eventually become Family Guy (1999). On September 11, 2001, he was scheduled to return to Los Angeles on American Airlines Flight 11 after being a keynote speaker at his alma-mater in Rhode Island. Due to a mix-up by his travel agent, he was told that his flight was scheduled to depart at 8:15am but it really departed at 7:45am and he had arrived at Boston Logan Airport a few minutes after boarding was stopped on his flight and he was told he would have to wait for the next flight. At 8:45am, one hour after the departure of American Airlines Flight 11, it was hijacked by terrorists and crashed into One World Trade Center (North Tower) in New York City killing all on-board. He was able to contact his parents within 20 minutes of Flight 11 striking the first tower to tell them he was okay. He said that he thanked his travel agent for screwing up the departure time or he would have been on board.


But for a mix up by his travel agent (what is that by the way???)  There would be no Seth MacFarlane today and no Family Guy!
Posted by intrepidideas at 8:28 PM 1 comment: