Life is pleasant and peaceful. Picture yourself parked on something like this:

There's lots of activity around you. All the people are laughing and having fun.

The next thing you know you're no longer sailing. In a millisecond, all that you had in front of you has vanished.... You're now holding on frantically to the only thing in sight - a small piece of driftwood; the only remnant of the posh life you left behind you hours ago.

You look around in all directions but there's no one or nothing in sight. 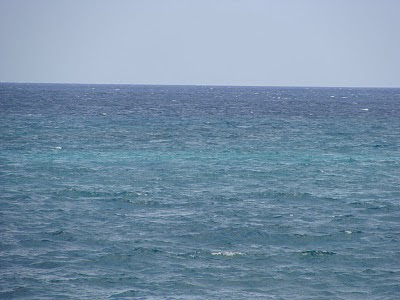 You look to the South, here's what you see: 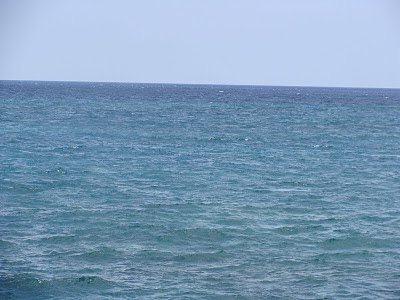 The East and the West yield similar views.

You focus on the horizon and hope for the best. Your mind starts to make a mental note of the rhythm of the waves as you stare and imagine each speck is not merely a figment of your imagination but actually a ship coming to rescue you from impending doom......


A few days ago, I parked myself in front of the above view for a few hours. Partnered with a good book, some water and shade I felt that I had truly found paradise. I felt so relaxed. Too relaxed if you will.

Never one to be encumbered by routine.... I think I relaxed myself into a state of confusion. I stopped at one point and actually drifted into fantasy. I wondered..... what would it be like to be stranded at sea. Nothing around me for miles. No telephones, traffic, loud music, or television. Not even the simple familiar pattern of speech to occupy my attention. Nothing but the sound of the water and the wind blowing over my head. The pain from the sun baking my exposed skin is interrupted by the occasional relief of a bird flying by and blocking the suns' powerful rays, if only for a second. The monotony is broken only when I stop thinking about the threat from above and focus on the predators below the surface of the water. I realize that the bleeding scrape on my shin is more than just a stinging reminder of the salt water around me but a crimson invitation to deadly creatures in all directions. My fear of what lies beneath the surface of the water takes a second place to the fact that there's no water to drink and no one around to share my misery and desperation. Every minute that passes brings me a flash memory of loved ones, friends, family, and the simple comforts that I've grown accustomed to. I struggle to stay afloat.... my arms and legs tire but I keep kicking and paddling.... never giving up hope!

Yikes... Enough of this nightmare.

Time for some coffee and a muffin!

And back to the good life!
Have a beautiful Day! 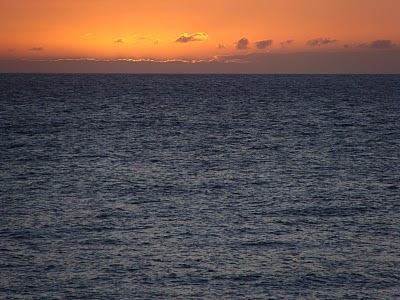 Do make the best of it!

Posted by intrepidideas at 1:32 PM 6 comments:

Yes, sounds like a great name for a cocktail huh? (giggle)

The choice is yours!

That's not my boat!

You can stop it with the cards, letters, flowers, and emails.....

I just got another email from a "Friend" asking if this was my boat and asking if I'm okay. :)


Interesting story huh? And talk about being in the right place at the right time with your camera ready.

Simply said.... The name is inspiring enough. But here's the story anyway.

In 1979, Diana Nyad stroked her way into the history books by completing the longest swim (men or women) in written history. The path --from the island of Bimini to the Florida shore-- 102.5 miles. Apparently, that incredible record still stands today.


But here's the most inspiring part - 30 years later, Diana will make her second attempt to swim from Cuba to Florida... Yep. non-stop; sharks, sunburn, dehydration, and jelly fish included.
Her first attempt was thwarted by a storm. Here's part of what happened:

41 hours and 49 minutes later, Diana's team was pulling her out of the sea – battered, delirious, ravaged by jellyfish, scarred by the salt water; and only 50 miles from where she had started. That left her almost 60 miles from her intended landing spot see full story 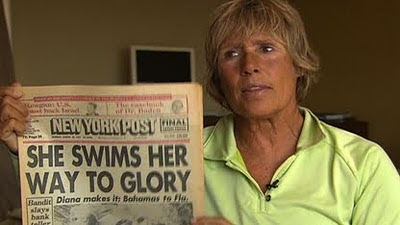 In her words talking about her 102.5 mile swim: "I knew that this was going to be my last swim. I was 30 years old and I thought, it's about time I grow up and join the job market. And you know, as an athlete, it's part of the tragedy of sports, is that you have to retire when you're young. Nevertheless, I was swimming 102.5 miles, from the Bahamas to Florida, and it took a long time. It took many, many long hours. But in the end, when I saw the shore, of course, some of the perspective started flooding. But the way to do it is not to think of the big picture. It's to think of stroke by stroke and do it as perfectly as you can."


Now she's at it again.... Watch these videos taken during her 24 hour practice swim:

How will she do it? Stroke by Stroke!

The other day my paper shredder jammed. I was trying to figure out if I should repair it or buy a new one.

I came across this while surfing the web:


How do you eat an Elephant? One bite at a time.

How do you eat a Volkswagon? Watch This!


So if you're looking for a quick way to get rid of some of the extra junk around your house, Maybe you should consider buying one of these gigantic shredders and keeping it in your back yard. Just think, your neighbors will love you!

Fortunately, I LOVE to travel. I don't like crowded airports very much but that has just been the cost of doing business lately so I've learned to just tolerate the lines and crowded security checkpoints etc., I've re-defined the word patience and embraced the entire concept more dearly.

Alternatively, I've had the chance recently, to jump in the car and do a bit of driving around the "Good Old USA." That has been quite fun indeed. You get a completely different flavor driving through the heartland of America and seeing things at a different pace and up close and personally. I'll certainly cherish my memories from a Truck Stop in northern central California just last week. I'm not sure I've ever seen so many tattoos in one place at one time. But the coffee sure was good! And boy did I have to pee. I can't tell you the things I learned while standing at the urinal in the bathroom and listening to a few truckers. (I'll eventually get around to throwing some photos on the blog from my travels)

Driving on the open road was quite nice. For me, there's something a bit romantic about throwing a few bags in the car, strapping a vehicle to your back, popping in a few tunes and then hitting the open road. I just love the freedom of traveling that way. No schedules, no time crunches, no dead-lines.... It's just you and the road.

Anyway, all this driving got me to thinking about poetry. In particular, a piece by Robert Frost popped into my head and it's been roaming around there for a few days. You ever get a song stuck in your head? No matter what you do, the song keeps spinning around in your brain until finally you threaten to kill yourself and in the interest of self-preservation your brain finds something else to think about. Well that's kind of where I am with the Frost piece. I'm hoping that if I put it down on paper, well in this case - on Blog - I'll be able to move on to something else.

Robert Lee Frost (March 26, 1874 – January 29, 1963) as you may know, was an American poet. He is highly regarded for his realistic depictions of rural life and his command of American colloquial speech. He is a very popular and frequently-quoted poet. Frost was honored during his lifetime and actually received four Pulitzer Prizes for Poetry. 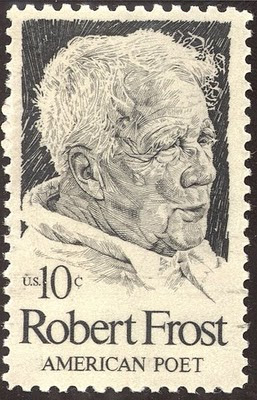 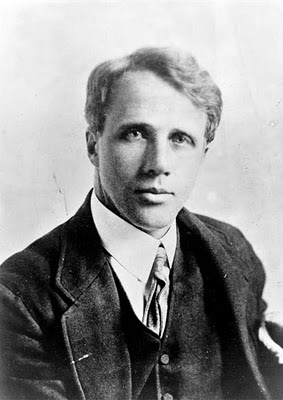 Here's the poem that's stuck in my head:


Whose woods these are I think I know.
His house is in the village, though;
He will not see me stopping here
To watch his woods fill up with snow.
My little horse must think it queer
To stop without a farmhouse near
Between the woods and frozen lake
The darkest evening of the year.

He gives his harness bells a shake
To ask if there's some mistake.
The only other sound's the sweep
Of easy wind and downy flake.

Posted by intrepidideas at 11:48 PM 2 comments: