Where Can You buy the Nintendo Wii?
Last year Santa was a hero in my house. He left a brand new Xbox 360 underneath the Christmas tree. Boy was that a hit. I must add that I became quite a fan of the game myself. Madden 2007, Sonic the Hedgehog, and NBA Live were the popular games. I must admit that I was a bit disappointed in the lack of availability of age appropriate games for the younger kids, or "E" rated (Everyone) games. But I was very impressed with the graphics. Xbox 360 seemed to win that competition hands down against the other platforms. Please note that I haven't played the Playstation 3 yet. Nonetheless, as the year went by more and more games became available and I discovered that with a special disk ordered from the company, we could configure our console to play the older regular Xbox games. This created a new pool of games. We added the Lego Star Wars games to our collection and then followed up with a very cool game - " Surf's Up" shortly after...... I really like that game. I'm not a surfer and don't really buy into the whole surfer image but the movie was cool and the characters have some redeeming values and I get " totally "stoked" playing the game." (See, I even learned a few new words) I later picked up the Tiger Woods game on sale and quickly found that game to be quite enjoyable as well. It's fun to create your own players and customize them in size, appearance, and dress. You'll have fun trying to create someone who looks like you and plays like you..... Anyway, I summarize this all to say: It was a nice gift from Santa and it brought and continues to bring joy to me and my household.
So this year, after succumbing to all of the hype and listening to all of the so called advantages of the Nintendo Wii system from my friends, I stopped in a game zone and checked out the Wii system. Pretty cool. It has just okay graphics in my opinion - Not nearly as good as the Xbox 360. But it was fun using the wand/baton or whatever that thing is called and I enjoyed the physical interactivity. I processed the information and decided I could definitely justify owning two game platforms. The Wii is just different enough to warrant a purchase. I reasoned that the different controls and motions are a required skill set that today's children should master. For example:
Look at the Predator and Global Hawk weapon systems:
Pictured below: These UAV's (unmanned aerial vehicles) are the military's latest manifestation of space aged, sci-fi, technology. These vehicles are largely being flown by 25 - 45 yr olds who grew up playing Pac Man, Space Invaders, Galaga, and Donkey Kong. Who would have thought that they'd be sitting in a bunker thousands of miles away from the weapons system digesting tons of computer generated information and making life or death decisions utilizing skills perfected on those antiquated gaming systems. 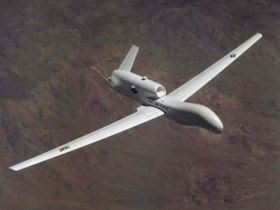 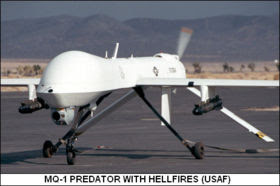 So with that distorted reasoning and logic, I decided to ask the big guy(Santa) for a Nintento wii for Christmas this year. That should be easy enough right? I remember seeing them in all of the stores just a few months ago for around $249. Concurrently, I decided to look online to check the availability. Well, guess what? That was a few months ago. I just casually looked around the web starting with the obvious places like Toys R Us, Best Buy, Target and you guessed it> These are the messages I received: Sold Out, Out of Stock, Unavailable, etc., etc., Wow. Who would have thought? I then went to some other places like: Costco.com, Walmart.com, Circuitcity.com and the likes.... Sold Out! The only place that the Wii seems to be available is Ebay and Amazon. All for outrageous prices! Forget that! Wow! Can this be real? How can a company like Nintendo not have enough platforms available at the peak of the selling season?

I guess I snoozed by waiting this late to order a system but I guess Nintendo made a bigger mistake in not being able to quench a thirsty market at a critical time. At least I can kick back and wait for Santa's elves to build me one and get the free delivery on Christmas Eve. I wonder what the other shoppers will do. Anyone know of a good place to buy a Wii this close to Christmas at a reasonable price?

very true man.
we had a wii at our house, but when my sister went off to college, she took that with her. (luckily i get it back in a week or two when she comes back for christmas break.) The wii makes gaming fun, and almost as importantly, it makes watching other people play fun too.
that being said, the wii is really a "newness" toy. i had it for 3 months for before it left me for, and honestly i didnt play it that much. i really only played it when people who didnt have one came over. as lazy as it sounds, to play the wii is alot of work.

as far as them being sold out, i live inm houston tx and i recently (week or two ago) saw them for sale at my local HEB plus. i wouldnt suggest playing the prices on ebay, which i hear are $5oo upwards, im sure after the holidays die down, they will be everywhere. but i suggest going to specility stores instead of supermarkets. try EB games or Gamestop.

btw, great blog, you made my RSS feed.