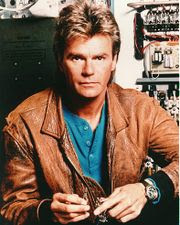 When I was a kid, I loved taking things apart and putting them back together again. I just loved getting my hands on old televisions, stereos, and radios. Anything around the house that was broken gave me a license to work my magic. Occasionally, after some fiddlin' and fixin' I'd manage to get something broken to work again. And of course, there were those times when the reverse was true. My older sister sometimes reminds me of how I wired her personal telephone into the stereo system of the house and blasted her conversations live, loud, and in stereo! Oh, sibling rivalry - I'm glad we can laugh about these things 30 years later. And I'm glad my parents never found out that I drilled a hole in the floor to run the wires. What was I thinking?

Naturally, it was no surprise that when the show MacGyver came out I became an instant fan. I remember chilling -back in the day and watching MacGyver before I hit the club scene with my friends. I admired how he could take common, ordinary household items and fix or build just about anything. I recall the show where he used an ordinary ball point pen to repair a punctured fuel line in an automobile. Still another favorite; The time he repaired a blown fuse using aluminum foil from a stick of chewing gum. And let's not forget how he repaired a bullet hole in a hot air balloon with a map and some tape. Fascinating stuff to say the least. And slightly more realistic than the A-team's antics. (Remember those guys?) With his Swiss army knife and some ordinary items, just about anything was in the realm of possibilities.

And so it was no accident that I would stumble upon and be attracted to the following video: This guys claims you can power and ordinary television with a AAA battery, some duct tape, and one RCA cable cord. Watch how he does it:


Is that a MacGyverism or what? (Yes, Macgyverism is a word) Can you imagine sitting around your house during a blackout and wanting to catch the latest episode of Survivor? Desperate Housewives? 24 ? or American Idol? Then bamm! You whip out a MacGyverism. Let's hope you have local channels and a good antennae because I haven't seen the youtube video hook-up for the cable box yet.

Well anyway, I got a kick out of the video. Who knows if this actually works or not? If any of you gets around to trying this before I do, please leave me a note. I did some more searching and I came across this hilarious response to the video. Enjoy the viewing, it's short:


Some people are crazy and have too much time on their hands!
Posted by intrepidideas at 8:44 PM

Too funny! I tried every kind of glue, caulk type gunk and adhesive to reattach the decorative top on the sink faucet. Everything failed. So, I chewed up some gum. Yep, it's held fast. True story.

Thanks so much for stopping by and thanks for the great comments. Please come back again.

hehehe!! okay the groundhog vid made me giggle, but you're right--groundhogs have wayyyy too much time on their hands. LOL! ;)

ohh man, i loved macgyver as well. in fact, i was much like him way before his time on the toob. hehe!

well i started typing my own personal macgyver story here and it just got too long. LOL! so, one day this week i'm gonna post it on my blog. its just too funny not too! hehe!!

I'm still laughing at this craziness. I'll stop by to check out your MacGyver post. So make it good...

Lovely post! As a kid, I love McGyver too. And tried fixing up things or make innovative inventions around the house. Quite a surprise to my parents because I'm a girl. Now, I think mythbusters is proving McGyver wrong. It's like telling a kid there is no Santa!